Interview with a Fraud: Margaret B. Jones 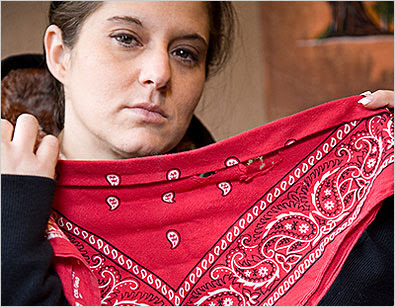 I interviewed Margaret B. Jones, the author of “Love and Consequences,” a gritty memoir of a white gangbanger during the 1980s crack wars in the mostly black South Central Los Angeles. Gushing advance reviews gave the book literary street credibility.

Both Jones and the book were off kilter. The book itself was more “As the World Turns” than “Boyz N The Hood,” and the noble drug dealers were cardboard, stock characters. Though she was charming, Jones’ chronology was fuzzy.

After the story broke that Jones was really Margaret Seltzer, a middle-class pathological liar, my Star-Ledger editors scrambled and killed the interview. I chuckled that the publishers hadn’t used a legal intern with advanced knowledge of Google to blow apart her web of lies.

A few days later, I had the sickening realization that Jones’ made-up ghetto slang and fake gang life cribbed from the movies were no joke, but just another string of grotesque African-American stereotypes easily bought by a mainstream publisher.

Mercifully, Riverhead pulped all the books.

“Writing What You Know”

In “Love and Consequences: A Memoir of Hope and Survival”(Riverhead, $25), Margaret B. Jones details growing up in foster care and living in South Central Los Angeles at the height of the crack epidemic, with shootings and violence all around her. At the age of 13, Jones was a white Bloods drug dealer. One foster brother was killed by a rival gang, another spent years in prison. She escaped L.A., went to college in Oregon and wound up with a $100,000 book deal.

Unfortunately, Jones’ memoir was a complete lie. Jones turned out to be Margaret Seltzer, a 33-year-old single mother from a middle-class suburban background. Her gang knowledge, she claimed, came from interviews with gang members at a Los Angeles Starbucks. Riverhead, her publisher, has recalled all 18,000 copies of her book.

In late February, before she was exposed as a fraud, Jones (or Seltzer) spoke with freelance writer Dylan Foley by telephone from her home in Eugene, Oregon.


Q. What were the roots of your memoir?

A. I always wrote as a hobby. At university, a teacher asked me if I would talk to a friend of hers, the feminist writer Inga Muscio, for a book she was writing. I said “I’m not into the whole South Central as petting zoo thing, so I’m going to pass.” I eventually spoke to Inga, she read a short story of mine, and her agent called me. The agent said, “I’m going to send you a contract tomorrow. Get me 100 pages and I’ll sell it as a book.” I said, “I’m going to finish being a single parent and graduate from college, then I’ll think about the hundred pages.” This was 2004. You can only write what you know. In a creative writing class, a professor said, “You are resurrecting the dead. They’ll stay alive through your writing.” To me, I was writing about my loved ones.

Q. You write honestly and sometimes unflatteringly about yourself as a drug dealer. Was this difficult?

A. You have to write as if nobody will ever read it. When the galleys came out, I realized “Oh, my neighbors and kids’ teachers will read this.” I‘ve had to make peace with everything I’ve done in my life. I know God forgives me. As long as I continue in my life and try to do good things, I will forgive myself.

A. When you are dealing with foster care, people come and go. There were 10 or 15 kids who came and went. If you put too many characters in the book, it will confuse people. The kids who were there were my siblings. I combined some people and took the four main people who were always there.

A. When I got to college, I read all the theories about these beatings being handed down from slavery. You want to teach your children to behave because whatever you would do to them is a lot better than what the overseer would do to them. You have to look at the society we were in. What Big Mama could do was not as bad as what could happen if we got out of line and ended up dying in the street. What do you say about someone who is nearly a saint? We lived in the lion’s den. She changed over time, where she wouldn’t let the little kids go past the front walkway. She didn’t want them to get caught up in the gangs. She struggled looking back at her own life--she buried grandkids. That must have been hard on her.

Q. How did you make the decision to use the slang of the gangs in South Central Los Angeles?

A. It was really hard and you have to make choices. I gave a copy to one of my ghettoist friends and she said, “Man, you made the book so whitewashed.” Then the review in Entertainment Weekly said that the dialogue seems so exaggerated and extreme. You can’t please anyone. Would my brother enter the room and say, “Yo dudes, what’s up?” No. Do I want to alienate people? No. That was the hardest struggle of the book. When I came to South Central, I didn’t speak that way. I wrote the book so the dialogue evolved gradually. The dialogue at the end of the book is so complex that the reader wouldn’t have understood at the beginning.

(My interview with "Margaret B. Jones" ran in the Newark Star-Ledger in March 2008)