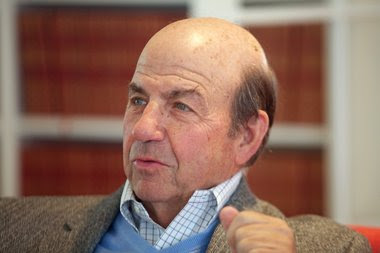 In his brilliant new book, “Quite Enough of Calvin Trillin: Forty Years of the Funny Stuff” (Random House, $27, 344 pp.), the dean of American comic writers showcases his varied talents mocking the public and private lives of politicians, average citizens and himself in a collection that goes from the 1970s to present.

Trillin, a writer for the Nation and the New Yorker, has trained his comic guns at Richard Nixon, the hapless George W. Bush and a flip-flopping Bill Clinton. He writes lovingly of his beloved late wife’s requirement that he attend every performance of his daughters’ school plays and how his happy childhood has crippled him in New York literary circles. He zings Sarah Palin and Donald Rumsfeld in poetry, writes the world’s only great street parking novel and explores comic absurdities in modern America.

Trillin, 75, met with freelance writer Dylan Foley at his home in Manhattan. Q. Do you think comic writers are born or forged?

A. Born. I think that comic writers, or comedians for that matter, are people who just have a skewed view of life. You can teach someone to be a better writer, but you can’t really teach humor. Humor is totally subjective and it is not connected to intelligence.

Q. You’ve been working for the editor Victor Navasky at the Nation for four decades. Do you think he’s out to destroy you?

A. He’s not out to destroy me. He’s out to impoverish me. When I became the “Deadline Poet” at the Nation, he said he’d pay me “in the high two figures,” which was $65 per poem. I first worked for Victor at a satire magazine called the Monocle in 1963. That’s where I met my wife. I came out way ahead. There were four or five lasting marriages from the Monocle. It was more successful as a marriage brokerage than as a magazine.

Q. You have this great satirical piece about refusing to write your memoirs about the New Yorker and your grandchildren not believing you ever worked there. How do you view the flood of memoirs by old New Yorker writers?

A. I found those books to be about promoting your friends and getting your enemies. What amazed me was how the writers remembered all these water fountain conversations from years ago. When all these books came out, people gave them the “Washington read,” where you look your own name up in the index, but don’t buy the book. Writers then got clever, stopped putting indexes in their books and sold more copies that way.

Q. In the 21 years that you have been the “Deadline Poet,” are there any political figures you miss?

A. If they are a really good target, the humor gets used up, like Dan Quayle. Kids from my girls’ elementary school were coming home with Dan Quayle jokes. I always liked (former Secretary of State) Alexander Haig. I wrote a few poems about Sarah Palin, but she was too obvious a joke.

Q. You used scathing sarcasm to great effect when you mocked people like Whoopi Goldberg and producer Harvey Weinstein, who minimized Roman Polanski’s 1977 rape of a 13-year-old girl. How did this story provoke you?

A. I was furious, not so much at Polanski, ’cause he’s a pervert, but at the people who defended him. Chris Rock said the best thing — “He’s supposed to be able to rape a child because he made a good movie 30 years ago?” I did research for the poem, which is unusual. I went back to the grand jury testimony of the girl. It will make your skin crawl. This was a deliberate, drug-induced rape of an eighth-grader.

Q. Your wife Alice had a profound effect on your humor, often acting as your straight man. How did she inspire you?

A. I basically was trying to please her. I wanted to make Alice giggle.