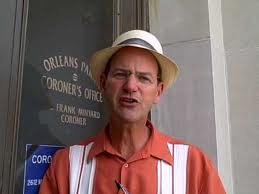 On August 29, 2005, Hurricane Katrina overwhelmed the levees of New Orleans, flooding large portions of the city and killing more than a thousand people. The inept and callous federal response to the disaster will remain a black mark on American history. The journalist Dan Baum was in New Orleans two days after the Katrina devastation and covered a city and its citizens’ as they struggled to survive and rebuild for more than a year.

Baum soon realized that the bigger story was not Katrina, but the convoluted and contradictory history of race, wealth and poverty in New Orleans. In his book “Nine Lives: Life and Death in New Orleans”(Spiegel & Grau, $26), Baum follows nine characters, starting in 1965, in the aftermath of Hurricane Betsy, and goes through to Katrina. Through Baum, the reader meets Dr. Frank Minyard, New Orleans’ flawed but heroic coroner, a cable car track worker and activist named Ronald Lewis and a transsexual bar owner named JoAnn Guidos, who refuses to leave her stranded regulars during Katrina. The sensual culture of the city and the rituals of Mardi Gras hang over black and white residents alike, with the wealthy Billy Grace, a white civic booster, becoming a Mardi Gras king, while Belinda Small has a daily uphill battle as a black single mother in the impoverished Lower Ninth Ward. Baum creates a rich picture of the bonds and divisions of race and class in New Orleans through his nine unforgettable survivors.

Baum, 53, was raised in South Orange, was a staff writer for the New Yorker and is the author of the book “Citizen Coors.” Baum spoke to freelance writer Dylan Foley by telephone from his home in Boulder, Colorado.

Q. What was the circumstances of you winding up in New Orleans during Katrina?

A. I had asked my editor at the New Yorker to let me go to New Orleans when I heard the city was being evacuated, but my editor said the city always evacuate during hurricanes, but nothing happens. When the levees broke, I was told to get there as soon as I could. It was hard to get into New Orleans because of the police roadblocks. I was there for weeks after Katrina and was back and forth a lot for the next year.

Covering the storm and the rebuilding was all so dramatic, but I realized that there was a lot more interesting things to say about New Orleans than Katrina. I didn’t want to do a Katrina book, for commercial and personal reasons. The question was how to throw a rope around New Orleans?

A. I wanted to build these characters over many years. I wanted to start the book with Ronald Lewis the aftermath of Hurricane Betsy and to end the book with him after Katrina. It was risky book, because these nine people didn’t all wind up trapped on the same rooftop.

Q. You build these beautiful and powerful scenes in the book, from Frank Minyard grabbing the coroner’s job decades ago, to Tim Bruneau, a young cop driving around a dead woman’s body after Katrina and having a horrible epiphany about race and poverty. How did you put these scenes together?

A. In the first interview, I’d have people tell there stories in broad strokes, then I would go back to the interviews. I’d ask more questions, finding out what people wore, what cars they drove, what they said. I’d visit sites in New Orleans where events took place and takes pictures with my digital camera. I’d go through newspapers, film and pictures. I used a novelist’s tools to make the scenes complete, but I would pack it with as much information as possible.

Q. What was your experience going to the Lower Ninth Ward with Ronald Lewis and how did you shape the end of the book?

A. We looked at Ronald Lewis’ mud-covered lawn and his wrecked house. He said, “We are going to come back.” I thought, “Somebody’s got to talk to this guy,” but he was right. I had underestimated the power of community in New Orleans. I made some other decisions as a writer. There were no bad guys in the book, and I wanted all these nine stories to end happily. I picked moments where these people’s lives were ascendent.
(This interview ran in the Newark Star-Ledger in February 2009)
Posted by Dylan Foley at 11:04 AM