Glen Duncan on "The Last Werewolf" 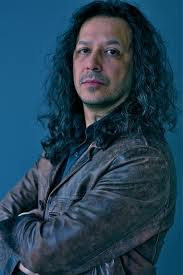 In his new novel “The Last Werewolf”(Knopf, $25.95, 304pp.), the British writer Glen Duncan creates Jake Marlowe, a 200-year-old English lycanthrope, the last of his species. Bored and tired of the relentless pursuit by werewolf hunters, Jake craves a final battle and dignified death.

In his trilling, grim and wildly hysterical novel, Duncan has gotten into Jake Marlowe’s head, following him through the brutal lunar transformations, the joy of the hunt and the sensual experience of ripping humans apart. The ominous and wacky WOCOP (World Organization for the Control of Occult Phenomena) agents want Jake dead, but there are forces that will stop at nothing to keep him alive. Jake battles corporate vampires that don’t have sex (Bugger off, “True Blood“) and an amoral French billionaire collector. The bitter and burned-out Jake gets the shock of his life not through silver bullets, but when he finds love in the strangest place. Suddenly, the dying werewolf must live.

Duncan, 46, is the author of seven previous novels, including “I, Lucifer.” He met with freelance writer Dylan Foley at the Helmsley Park Lane Hotel in Manhattan.

Q. What motivated you to write about the last werewolf in the world?

A. My agent and I had a hard time selling my last novel, “A Day and a Night and a Day.” It was well reviewed and well received, but if a novel like that doesn’t win a prize, it slips off the radar. In a fit of pique, I said to my agent, “I’m going to write something you can sell.” The idea was to write a straight page-turner with no literary conceits. Immediately, once Jake’s voice was up and running, it was business as usual--love, sex, death and morality.

Q. Where did Jake Marlowe come from?

A. I realized halfway through writing the novel that one of the main antecedents was “An American Werewolf in London.” There are two ways to write a werewolf novel--you can examine the genre conventions, or you can say, what would it be like if I were a werewolf? I took the situation and imagined myself in it. What if I had to be a werewolf once a month, had a lot of money and had been alive for 200 years? There was an element of sheer fantasy fun.

Q. The transformation and hunt scenes are vivid, vicious and psychologically tortured. How did you write them?

A. It is the imaginative process, but there is a repository of information built up from the horror movies of the 1960s and ‘70s, and the great werewolf movies like “American Werewolf” and “The Howling.” We’ve all seen a million transformation scenes, but what the movies can’t do is interiority. In the transformation and kill scenes, I needed to get inside the psychology of Jake at the moment.

Q. You have a comic conflict between the werewolves and vampires. For Jake, vampires smell of rotting meat and don’t have sex. How did you develop this?

A. There has been a tradition of enmity between the two species. Vampires are massively overexposed today. I am a champion of writing about smell in fiction. There is not enough smell on the page. The canine aspect of the werewolf was a natural fit for me. I never really saw vampires as having sex. In the movies, the bite and blood drinking were surrogate activities for sex.

Q. Jake is a reluctant werewolf, but he truly loves the hunt. How did you handle this contradiction?

A. It’s a distressing thing to consider. If being a werewolf is really a curse, you’ve got to treat it honorably. If werewolves are going to carry on, there has to be an incredibly powerful force. There is the business of the craving, the hunger for the kill. It has to be deeply pleasurable and more than an appetite for meat. There has to be a sensual dimension to it.