Donald Ray Pollock on his Grisly, Brilliant "Devil All the Time" 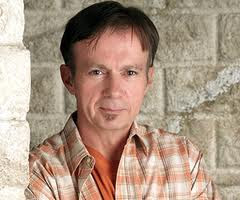 In 2008, Donald Ray Pollock broke onto the American literary scene with the darkly comic story collection “Knockemstiff,” set in a Southern Ohio hamlet, or holler, where the hardscrabble residents’ lives are plagued by drugs, despair and violence.

Pollock has just published his amazing and devastating debut novel “The Devil All the Time”(Doubleday, $26.95, 272 pp.). The book opens with the 10-year-old Arvin in 1950s Ohio, where his life is ripped apart by his mother’s death and his father’s religious breakdown. Meanwhile, Carl and Sandy are a team of husband-and-wife serial killers who pick up men on the highway, then torture, photograph and murder them. From semi-rural Ohio to the aching poverty of West Virginia, Pollock peoples his novel with religious con men, crooked sheriffs and predatory preachers. As Arvin enters manhood while navigating this corrupt world, he finds his choices are limited and brutal, forcing him to leave those he loves.

Pollock, 56, worked at the Mead paper plant for 32 years, before he entered Ohio State University’s MFA program in creative writing. Pollock spoke with freelance writer Dylan Foley by telephone from his home in Chillicothe, Ohio.

Q. How did you wind up writing about a husband-and-wife team of serial killers?

A. When I started the book, I had three characters. I had Sandy and Carl, and I had Arvin. I knew Arvin had to get on the road at some point. I wrote about his parents, then I quickly realized they had to die.

Q. What interested you in exploring Arvin’s father’s religious delusions that he could beat his wife’s cancer with a blood-soaked prayer log?

A. I wasn’t raised in a religious home, but a lot of people in Knockemstiff were, in a Baptist or fundamentalist way. I have always associated religion with a lot of violence. No matter what religion it is, be it Christian or Muslim, it is a great way to provide people with a moral code to live by, but there are people who twist things around. They are after money, power or land and they use violence to achieve those things.

Q. What are the ongoing influences of your childhood holler of Knockemstiff on your writing?

A. A part of it is that I’ve never moved away from here. This place is an integral part of me. I live in Chillicothe, but I am 13 miles away from Knockemstiff. At my age, I’ve probably got enough stories set around me so I can last myself out. In my writing, I’m probably not going to go any further than Southern Ohio.

I knew I had to have my own style. I wrote this story called “Bactine,” about two losers and a doughnut shop, set in Knockemstiff. I realized it was a lot better than the slop I had written in the previous two years. I knew a lot about the people in the holler from working at the paper mill, from living in Knockemstiff and from hanging out in the bars.

Q. In Donald Ray Pollock’s universe, the weak are preyed on and the abusers usually get away scot-free. How do you see the world?

A. I’ve always viewed the world as a sad and somewhat violent place. When I first started to write, someone told me, “You’ve got to have trouble.” I definitely overdo it. I know that. I am not saying that is the world is a completely negative and bad place, because it’s not. I’m actually a pretty happy person.

Q. You quit a good job and took a pay cut to go into your graduate program. How are things going as a professional writer three years after “Knockemstiff”?

A. My mill job was a union job. People make good money in the mill. It was the toughest decision in my life to leave. I had health insurance, a retirement plan, the works. It is extremely tough to make a living as a writer.