Judith Jones on her Brilliant Career Editing Julia Child, Madhur Jaffrey and Others 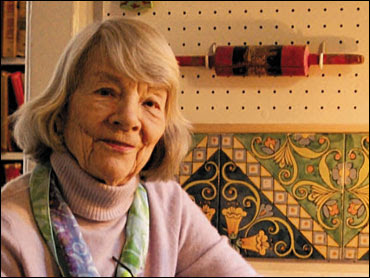 In her enthralling memoir “The Tenth Muse: My Life in Food”(Knopf, $25), the legendary Knopf editor Judith Jones recounts her brilliant career discovering and editing such cooking greats as Julia Child, Madhur Jaffrey and Marcella Hazan, her swirling education in the world of food in Paris and 48-year romance with her husband, the late writer Evan Jones.

In 1948, Judith Jones was on a post-collegiate trip to France when her passport and ticket home were stolen. She used it as an excuse to stay in Paris, ran an illegal restaurant and met her husband while working for him at a magazine after a series of comic coincidences. As a young editor in France, she pulled “The Diary of Anne Frank” out of a pile of rejected manuscripts. Back in New York in the 1950s, she championed Child’s “Mastering the Art of French Cooking,” bucking the nay sayers and shaping a revolution in international cuisine. Jones went on to seek out and cultivate such cookbook visionaries as Jaffrey for Indian cuisine, Hazan for Italian cooking and Irene Kuo for Chinese food. “The Tenth Muse” is a passionate exploration of the spiritual meaning of food in Jones’ life, a sumptuous feast from the plate of brains she ate as a penniless foreigner in Paris to exquisite meals she had in Israel. At the end of the book, Jones offers dozens of wonderful recipes that trace the arc of her life and career.

Jones, 83, was raised in New York and educated at Bennington College. In her five-decade career at Knopf, she has edited such literary figures as John Updike, Anne Tyler and Sylvia Plath. Jones divides her time between New York and Vermont, and spoke to freelance writer Dylan Foley at the Knopf offices in Manhattan.

Q. How did you become such a fearless eater when it came to new cuisines?

A. Self analysis is difficult. I really believe you are born with different genes. I got the food gene. I think it was also an instinctive rebelliousness. If I was going to be free, I had to be free of this fear of strange foods. There was an American suspicion of food..."If you are putting a sauce on it, you are covering something up.” Instead, what it awakened in me was a desire to try these things. I embraced all sorts of experimental food. I wasn’t afraid of anything.

Q. You and your husband came back to New York in early 1950s, a particularly barren time in American food. What was it like?

A. It was a bad period for everything. It was really painful. I couldn’t create the food I had tasted in Paris. It was really very frustrating, in both the lack of ingredients and lack of knowledge in real cooking techniques.

Q. Did you sense that publishing “Mastering the Art of French Cooking” was going to be the revolution it turned out to be?

A. No, I didn’t know it was going to be a revolution. All I knew that it was the answers to my prayers, and if I loved it so, other people would. I did notice that in the aftermath of the war, with more Americans traveling and secretaries saving their money for two weeks in Paris. Something was happening in America. It was a pure instinct of mine.

In those days, publishing was such a mom and pop operation. Alfred (Knopf) could say, “Give Mrs. Jones a chance. The book won’t cost much.” No one would guess that Julia Child’s cookbook would have the magic it did.

Q. You followed a brilliant pattern of cultivating sophisticated amateur cooks to write cookbooks that had mass appeal. How were you able to do this?

Q. It was really Julia and the success of her first book that empowered me. I felt that if you can do this with French cooking, when you are doing something completely exotic to Westerners like Chinese food with its very different cooking techniques, you need a guide because you may be making things you have never tasted before. I was never terribly interested in (professional) chefs’ books because my instinct was that it was a different world. It’s very hard for them to teach.

I was looking for a voice, like (Middle Eastern cookbook writer) Claudia Roden, whose family was forced out of Egypt, one that was deprived of her past and had the longing to reconnect, to keep the tie to her family through their food. Roden, Jaffrey and the others were all good teachers because they learned cooking late in life.

Q. What was your motivation to write your memoir?

A. I’m not completely sure what triggered it. One thing is that when you get to be my age, there is not much time left. There is a sense of wanting to get these memories down. A big factor was finding these letters that I’d written to my parents from Paris. I wanted to get to know that girl who wrote those sassy letters. You give a lot as an editor, particularly in food books, because you are encouraging and building a voice. I came to a point where I wanted to do something myself.
(This interview ran in the Newark Star-Ledger in January 2008)
Posted by Dylan Foley at 5:40 AM