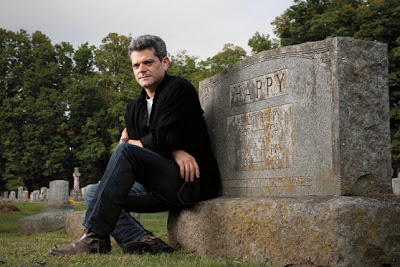 (Originally published in the Newark Star-Ledger in October 2007)

In his memoir “The Foreskin’s Lament”(Riverhead, $25), Shalom Auslander writes with rage, fear, humor and much profanity about growing up in a dysfunctional, strict Orthodox Jewish family in upstate New York and his raging against a vengeful God that he can’t stop believing in. He desperately wants to protect his pregnant wife and unborn son from God’s wrath and destruction. The central conflict in the memoir is whether he should circumcise his son or not.

Auslander’s engrossing story alternates between the present, where he awaits the birth of his son, and his grim, blackly comic past in a house with an alcoholic, abusive father and a death-obsessed mother and a life hemmed in by the 613 Jewish religious laws, from keeping kosher to marrying Jewish. Yeshiva teachers hammer in that God is always angry and that Anne Frank was killed because the Jews assimilated. Ever the rebel, he prays for the death of his father and tries nonkosher beef jerky at the age of nine. It is then a slippery slope to eating McDonald’s, reading pronography and shoplifting. Auslander is sent to a reform yeshiva is Israel, becomes a religious zealot, breaks his faith and sleeps with a prostitute. Again and again, he curses the God he believes will crush him. He is saved by marrying an escapee from a British Orthodox community with a sailor’s mouth. The final break with his family is searing and irrevocable.

Auslander, 37, was raised in the Orthodox Jewish enclave of Monsey, N.Y., and was educated at yeshivas in New York and Israel. He is the author of the story collection “Beware of God,” and lives in Woodstock, N.Y. with his wife and son. Auslander spoke with freelance writer Dylan Foley at a restaurant in New York City.

Q. How did you decide to write this memoir?

A. When my book of short stories came out, my editor suggested I write some articles and try to get on “This American Life.” I wrote a couple of stories and I wrote a few more, then it developed into a full book. I hated myself for writing a memoir. In the literary world, pornography is a step up. There aren’t many that I admired. They all had endings that mine didn’t seem to have. I don’t wake up with a family. I don’t get over God. As I was writing, I realized, “Here I am , about to become a father. I am not picking out Nike shoes and football wallpaper. I am worrying about God and whether to commit a brutal act on my son’s little willie.” There is no room for excitement or joy.

Q. Throughout the book, you have an ongoing, ranting conversation with God. He is also your only confident. Why?

A. He was my imaginary (jerky) friend. Because I went through so many changes, from practicing to not practicing, in the family and out of the family, I had no choice but to confide in him. He knows everything. He’s like an evil siamese twin that I can’t get rid of.

Q. How would you describe your dysfunctional childhood household?

A. At some point, I called my mother “the belle of the misery ball.” She was obsessed with death and dying. Everything with her was incredibly sad or syrupy sweet. You never felt that there was anything genuine there. My father was an angry, untalkative, unemotional father, who I was terrified of as a child.

Q. You gather up all the pornography and sex toys in your house and burn them, risking an almost certain beating from your father. Why?

Q. You went down a slippery slope from eating Slim Jims and McDonald’s cheeseburgers, to shoplifting literary works and musical soundtracks. Could you describe your fall from grace?

A. I started stealing things that I needed in my new world. I began stealing soundtracks and things that made me happy. It’s funny that it would be “West Side Story.” It’s a good album, but there was a real thought in my head that I might get away with marrying Maria. She looks Jewish, wears a skirt and covers her hair. In Manhattan, I was stealing glimpses of the outside world--art books, poetry books. I had an attraction to the darker writers. I was stealing Stephen King, things goyish.

Q. After the birth of your son, your ties were truly severed with your family. What happened?

A. In the first place, it was a severing that I wished for and worked hard at. There was an insistence on maintaining a certain myth of family that never existed and it caused everyone a lot of pain to maintain that story, which is a bad metaphor for religion. Blood is thicker than water, but thinner than the five books of Moses. I was shocked. To see my newborn son in his car seat on the dining table and to feel that rage coming from my parents, I thought, “I can’t do this.”

Q. Before you were married, you write about having a cheeseburger and having sex with a hooker in your car on the same night. What was the response to that story?

A. She sat on my hat, by the way. I was giving a reading in London. I told that story. There was time for one last question. An 80-year-old man with a yarmulke pushed himself up on his cane. His hand was shaking. I thought, “Oh, no, I’m going to get an earful.” He asked, “Which was better, the hooker or the hamburger?” I said, “I don’t remember. I was having them at the same time.” He looked like someone from my past, but there was no judgmental nature to him.


Q. The rabbis in school hammered you and your fellow students with a wrathful God, and warned that what killed Anne Frank was the assimilation of the Jews. Could you describe your education?

A. It was intense., but it was not a question of hypocrisy. My teachers believed what they were teaching 100 percent. That’s much scarier. I absorbed the fear. The Holocaust was a much different thing. I know for myself that it was incredibly baffling that you’d tell young children these things without any context, that it might happen to you. I am not a journalist. I am not a researcher. If you write a book, it tends to be taken as a statement about the Orthodox Jews or the Holocaust. It’s not that at all. All I can say is this is what happened. This is what I went through. For me, the larger discussion I’d like to have is on family and the conception of God.