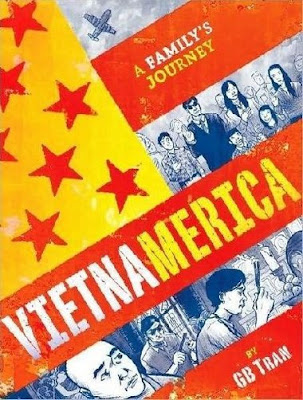 In cartoonist G.B. Tran’s turbulent Vietnamese family history, his maternal grandfather abandoned hisgrandmother and children in 1945 to fight the French and American armies for 30 years. His grandmother then had a child with a French colonel, while on Tran’s mother’s side, his uncle was drafted to fight for the corrupt South Vietnamese regime. His parents and siblings finally fled Saigon on one of the last flights in 1975, leaving promising lives and careers in ruins. The American-born Tran captures this sweeping and exhilarating story in his beautifully drawn graphic memoir “Vietnamerica: A Family’s Journey” (Villard, $30). Tran succeeds in stripping away the layers of silence to find hidden stories in America and Vietnam that explain his parents’ experience, the horrors of war, the trauma of assimilation in a new country, and the costs of family separation and reconciliation.

Tran, 34, is a comics writer and illustrator living in Brooklyn. Tran spoke with freelance writer Dylan Foley at a teashop in New York City.

Q. Did you set out to write an epic story of the tumultuous histories of both Vietnam and your family from 1945 to present?

A. I really mean it when I say that I was trying to write the smallest story possible. I was telling my father and my mother’s story. To understand the weight of their decisions, I needed to understand where they came from. I’d ask my relatives a simple question, like “Who was So-and-So’s father?” They’d say, “He was a French colonel, but he’s now dead.” Wasn’t he the enemy? There was so much that wound up on the cutting-room floor. I could have written a thousand pages.

Q. Your father starts out in the book as a hard, uncommunicative immigrant man. Through the stories, you peel back the layers and you see the destruction of his life in Vietnam. How did you do this?

A. That is the journey I went through. I was your typical kid — I hated my parents, I couldn’t talk to my dad and there was this huge culture clash. Learning about his past, I understand where some of his opinions come from. People have asked me, now that I’ve done this book, has my relationship with my father changed? My relationship with my parents has evolved, but not necessarily for the better. We still have some issues.
Every story I’d pick up on my father from his brother, his sister, or his best friend in Vietnam led to another part of his personality. Being with my parents in Vietnam in 2001, that was the first time I saw him truly surrounded by family and friends. I saw chumminess with his friends for the first time.

Q. You’ve said that writing this book broke your heart. Why?

A. It was awful. My wife had to watch me go through this project. It is one thing to hear stories about your family. It is another to run them through your own filters and to tell them. It was an intense feeling to draw my mother as a teenager, or to draw my grandfather joining the (anti-French revolutionary) Viet Minh. It was an enlightening experience overall. The humor in the book was intentional. I didn’t want people to read this book and think of it as 300 pages of depression. The best stories cover a broad emotional range.

Q. Why did you decide to write this family history as a graphic memoir?

A. I don’t necessarily see myself as a great writer or as a great illustrator, but when they are combined, I make decent comics. I am drawn to the interplay of images and words. That storytelling potential endlessly fascinates me. I didn’t want to just do a comic on my parents’ lives. I wanted to take advantage of all the tools that the medium has.
I wanted to make a book that could never work in another medium.

(Originally published in the Newark Star-Ledger on January 23, 2011)