Morgan Spurlock on the Supersizing of America 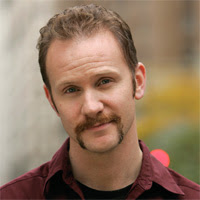 (Originally published in the Newark Star-Ledger in May 2005)

In January 2004, Morgan Spurlock burst into the Sundance Film Festival with his witty and satirical documentary “Supersize Me!” In the film, Spurlock used himself as a guinea pig, eating McDonald’s for three meals a day for 30 days. He wound up gaining more than 20 pounds and almost experienced permanent liver damage. The film went on to become the third-best grossing documentary in American history and provoked brutal attacks on Spurlock by the McDonald’s corporation and corporate food lobbyists.

Spurlock is back with “Don’t Eat This Book: Fast Food and the Supersizing of America” (Putnam, $22). Expanding way beyond his film, Spurlock explores the America’s unhealthy eating habits and how these habits are fostered by fast food companies like McDonald’s and Burger King, and large corporations like Kraft and Beatrice, who peddle unhealthy meals and snacks to a trusting American public. With a combustible combination of wit, sarcasm, anger and hard-hitting research, Spurlock argues that groups ranging from the American Medical Association to government agencies like the U.S. Department of Agriculture have been corrupted by corporate interests. With 60 percent of Americans overweight and 30 percent obese, he notes that we are eating ourselves to death. Spurlock’s possible solutions are hard: exercise, healthy school lunches and changes in eating habits, as opposed to “silver bullets” like pills to reduce cholesterol and weight-reduction operations.

Spurlock, 34, was raised in West Virginia and studied film at New York University. He is presently producing and starring in a documentary series called “30 Days” on the FX cable channel, and lives in New York City with his fiancee, a vegan chef. Spurlock spoke to freelance writer Dylan Foley from his publishers’ offices in Manhattan.

Q. Why did you follow up “Supersize Me” with a book?

A. There was so much we couldn’t get into the film. In 98 minutes, there is only so much you can cover while keeping it entertaining. I was contacted by a literary agent and I sent her a hit list of things I wanted to expand upon, from school lunches, to the medical profession, the government and the food industry. These are shocking and important things to talk about.

Q. In the movie you mock McDonald’s mercilessly. In the book, you show anger at situations like McDonald’s restaurants being placed in children’s hospitals that perform gastric bypass operations on obese teenagers. How do you see the tone of the book?

A. There is a lot more gravity to the book. When you get into the nuts and bolts of what is happening, the gravity becomes apparent. The book still has an upbeat tone, because I am an eternal optimist. On the children’s hospitals, the (hospital) spokesmen say, “We want the kids to have foods that they are comfortable with.” Great, let’s put a tobacco shop in a cancer hospital so the patients can have the brands they are familiar with. It is the same ludicrous idea.

Q. Could you go over the changes your body underwent eating McDonald’s for 30 days?

A. I gained 24.5 pounds in a month. My cholesterol went up 65 points and my blood pressure jacked up. My liver got so filled with fat that the doctors were comparing it to that of an alcoholic. I was on my way to giving myself cirrhosis of the liver. There are three things that happened to me that we medicate heavily for in America. I became severely depressed while eating this food. I’d feel terrible and depressed. I’d lash out at people. Then I’d eat McDonald’s and feel great for a while. I’d get hopped off on caffeine, sugar and fat, then I’d crash. For this roller coaster, people take happy pills. I experienced sexual dysfunction while doing this film. I also couldn’t focus and had all the signs of attention deficit disorder. What would happen in the United States if we started to treat the causes rather than the symptoms?

Q. You show evidence that medical like the American Medical Association and governmental agencies like the Food and Drug Administration have been corrupted by food corporation lobbyists. Could you explain this?

A. It’s been happening forever. We are complacent. We think that people are looking out for us. Who’s looking out for us? The fact is, nobody. The American Diabetes Association just announced that sugar doesn’t have much to do with diabetes. It’s not sugar...it’s when you eat sugar in excessive amounts. It’s also just coincidence that Cadbury-Schweppes just paid the ADA millions of dollars over the next several years.

Q. You’ve pointed out some hopeful examples in changes in school lunches and snacks. What is happening?

A. Senator Tom Harkin has supported a fruits and vegetables program in eight states. They started putting boxes and vending machines in the schools, where kids could have free fruits and vegetables all day. School administrators got the junk food out. You look at the schools where they have taken out the junk food and the sugar-filled sodas and the number of disciplinary problems plummet.

Q. What kind of backlash was there against your film?

A. It was the lobby groups that came down on me. They attacked me in the press, saying “Spurlock is not a doctor or a nutrition expert.” Duh. I’m a filmmaker putting out a film that deals with a serious issue. These lobbyists have their own “experts” who shuck and jive for for the food companies. Once the film screened abroad, the McDonald’s corporation itself came after me. In Australia they called my film a lie. In other countries, McDonald’s contacted the radio, newspapers and magazines and threatened to pull advertising if they interviewed me. Because of this, in Japan only the public television station would talk to me.

Q. What do you think of McDonald’s recent efforts to make a healthier menu?

A. How I explain it is you have a lettuce curtain in front of a stage of fat. They’re like, “Ignore the fat behind the curtain.” Salad sales at McDonald’s are still terrible. One or two customers out of a hundred buy a salad. People say, “Look, McDonald’s is healthy now. They sell salads. I’ll have a double cheeseburger.” It’s lip service. It’s a sham. The core of their business is fries and burgers.

Q. How can we educate ourselves about engineered foods, harmful preservatives and fattening things like high fructose corn syrup?

A. What the movie started to do, and I hope the book will also do, is make consumers seek out some facts on their own. The corporations aren’t going to tell you what you need to know. We have to become conscious consumers. Every time we eat, we vote with our forks.
Posted by Dylan Foley at 2:35 PM