Sharon Olds on Her Mother's Death in "One Secret Thing" 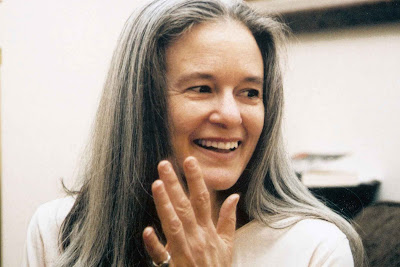 In her beautiful and devastating ninth poetry collection, “One Secret Thing”(Knopf, $27), Sharon Olds’ handles both images of war and the decline and death of a complicated and formally cruel mother.

The collection opens with a dozen poems on the horrors of war, most drawn from photograghs covering families being rounded up for extermination, soldiers gleefully mutilating a corpse and a legless pilot climbing into his plane. Olds moves on to her gorgeous and harsh personal poems, including a story of child abuse, a grotesque stepfather and her angry and abusive mother’s transformation into a more vulnerable, understandable figure as she heads towards death. In a breathtaking dance of emotional reconciliation and mourning, Olds explores her relationship with her mother that was forged in fear, anger, love and pity.

Q. Why did you decide to start your new collection with a series of war poems?

A. I have always been intrigued by photographs of how people treat each. I saw these war photographs and I tried to forget them. It sometimes takes me years to realize that obsessive thought about a particular photograph is like a first line of a poem. Twenty years ago, I looked at a lot of photographs from World War II. I wrote hundreds of poems from these photographs. I had given my editor Judith Jones a book called “World War,” of 50 of my best war poems. Judith is such a person of integrity and uprightness. She sent the poems back to me, and said “No, it’s not good enough. It’s not up to your writing about private life.” I went through the 50 poems, and some new war poems, and pulled out 12 of them. There was the question of putting them with the “Mother” book I had also been writing. I had to go through all the childhood poems and the mother poems to make sure that there was a sense of proportion about private and public anguish.

Q. Would you say that most of your poems about “private life” are autobiographical?

A. I only last summer stopped saying “I can’t talk about this.” Always before, I had made a vow not to talk about it. Last summer, I realized it was an important thing to say that these poems are 100 percent as close as I can get to accuracy. What I say is I have no imagination, that I can’t make things up, nor would I dare. In case I got sued or stalked because of what was in my poems, I was officially not saying it was autobiography. I secretly thought that everyone knew who the “I” in my poems was.

Q. Two sections of the book involve the physical breakdown of your mother, and your emotional reconciliation with her as she heads towards death. Were these poems difficult to write?

A. I have to confess, being a confessional poet, I like to write, I like to make things. It is a pleasure, a somber pleasure. It is what I am and what I do. I tell stories. I didn’t really start writing full out until I was 30. My first book came out when I was 37. I had enough history of silence, or partial silence, that to be able to make these songs and sing them, that it is so much better than not doing them. I don’t know how to answer the question if it was difficult.

Q. In the poem, “One Secret Thing,” you indulge in a last act of mercy towards your dying mother, and in “Last Hour,” you lay on the floor next to her. How did you process your relationship with your mother through these poems?

A. When you are a grown up, you can be kind to people, even if they are mean to you. To be good to them is good for your heart. It is kind of terrible that someone (the narrator in the poem) could be content with lying next to someone that couldn’t speak or see. When that person could speak or see, that person was terrifying. There was grieving to be done for the mother’s life, as well as her death. This mourning was for both the mother and daughter.

(This interview was published in the Newark Star-Ledger in December 2008)
Posted by Dylan Foley at 10:56 AM