Coma Artist’s Wife Tells All, as Channeled By Jami Attenberg 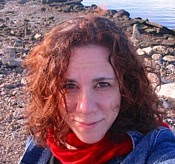 By Dylan Foley
In her witty debut novel “The Kept Man”(Riverhead, $25), Jami Attenberg tells the story of Jarvis Miller, a former Manhattan party girl who tends to her acclaimed painter husband Martin, who has been in a coma for the past six years after falling off a ladder. As she grieves for her husband, the value of his paintings shoot up in the New York art market.

Jarvis lives in the artists’ community of Williamsburg, Brooklyn, which gentrifying at breakneck speed. A former muse of her comatose husband, Jarvis has lived an almost catatonic life as a “half widow,” waiting for her husband to die. One day at the local laundromat, she meets three hip men--a writer, a stay-at-home dad and an actor, who are all “kept men,” supported by their high-powered wives. The men open up a new world to Jarvis, while at the same time she discovers a large quantity of photographs documenting her husband’s pre-coma betrayal of her.

“There are a lot of kept men in New York City,” said the 36-year-old Attenberg in an interview at her Brooklyn loft not far from the cool neighborhood she chronicles. “When I was doing research for my story collection ‘Instant Love,’ there were a lot of men online who’d write things like, ‘I have a wife. She’s ignoring me. I want someone to play with.’ I chatted with some of these guys and got into their heads.”

Attenberg noticed that the New York coffee shops seemed to be filled with scruffy, layabout men. “You see these people in cafes all day,” said Attenberg. Some of her knowledge,” she dryly admitted, came from a weakness for artistic boyfriends. “ I’m really fascinated with these men. I think I’ve dated every starving artist around.”

Attenberg was working on her novel when the battle over Terry Schiavo’s life and eventual death gripped the nation. “I write in a really organic way,” she said. “I had several ideas floating around in my head and the original one was the three kept men. Then the Terry Schiavo case started at the same time. I also had an artist friend killed in a motorcycle accident. With Terry Schiavo, the media portrayed everything in a black-and-white way. I was interested in the gray areas.

Some of Attenberg’s motives for putting Martin in a coma were searingly personal. “When I was writing the book, I was going through a break up, and I couldn’t let that relationship go,” she said. “All the things then started coming together. Terry Schiavo was kept, as was Martin. All the characters were kept in their own way.”

When Jarvis contemplates pulling the plug on Martin’s life support, the right-to-lifers jump in and the battle for Martin’s soul commences. Attenberg’s wry sense of humor and vivid prose draws sharp pictures of Jarvis, the hipster art scene in New York City and the often tortured nature of love.

Though Attenberg has had an all-access pass to New York’s insular art world during the 10 years she has lived in New York, the former hard-partyier Jarvis is fiction. “I’m not her,” said Attenberg, a Chicago native. “She’s definitely a wholly New York woman. I knew women like her who embraced New York from an artistic perspective. Some of these women tend to get stuck in the muse role.”

In the novel, Jarvis cruelly refers to herself as a “half-widow,” trapped between the life and death of her husband. “’Half widow’ something I made up,” said Attenberg. “I like the way it sounded. You get all the bad stuff but none of the good stuff when you are a half widow. You get all the misery, but you don’t get to move on. You get a certain amount of sympathy, but no freedom. She doesn’t have sex for six years. That’s terrible.”

Attenberg herself is no stranger to voyeurism and great sex writing. She was a blogosphere pioneer, starting her own blog in 1998, which chronicled sex, art, New York delis, dating and love. She has also written vivid short stories and nonfiction sex pieces for the edgy erotica Web site Nerve.com, writing that formed the backbone to her 2006 sensual collection “Instant Love,” about the turbulent sex lives of various women.

Attenberg has toned down the personal dating stories on her vibrant blog after starting a serious relationship with a documentary filmmaker. “I’m not writing about what we do anymore,” she said firmly. She does, however, have an ongoing comic commentary on her book tour, noting that a fan offered her drugs, but she turned the fan down because she doesn’t do drugs anymore.

Martin, the once-loving and now-comatose artist, rescued Jarvis from her own self-destructive behavior and turned her into his uptight muse. His legacy to her are dozens of invaluable paintings and several boxes of art photos recording his numerous adulteries. The photos flip Jarvis’ views of Martin and pushes her into her first sexual encounter in six years.

Attenberg is amused by the egocentric Martin. “Martin had to documents things,” she said. “He’s such a jerk. From an artistic perspective, I have a lot of friends who are visual artists, and they are always documenting their work. It’s a natural thing for an artist to want to do this. When I was doing research on Craig’s List, the men were so proud that they were cheating on their wives. Do men cheat to get caught?”

Attenberg said that she still finds egocentric artists all over New York. “They tend to put themselves first so much of the time,” she said.

“I went to this party after I sold my book,” said Attenberg. “This artist came from across the room and started talking to me. He told me he was married and how much he loved his wife. He told me that they would never have babies, even though she wanted babies, because his work came first. I said, ‘I just wrote a book about you!’”

Dylan Foley is a freelance writer from Brooklyn, N.Y.
(This interview originally ran in the Denver Post in February 2008)