Paul Rudnick on Everybody in New Jersey Being Arrested for Fraud 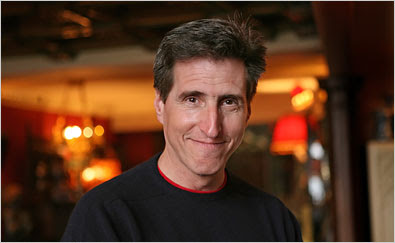 In hilarious essay collection “I Shudder: And Other Reactions to Life, Death and New Jersey” (HarperCollins, $24), the playwright and screenwriter Paul Rudnick goes from exploring the meaning of growing up in Piscataway to his disastrous first encounter with Broadway and the rollercoaster ride of writing blockbuster screenplays for Hollywood.

Rudnick writes about his mother and two aunts, the formidable Klahr sisters, with their tough survival instincts and their joy at great one-liners, a family where “culture was revered, but not practiced.” He chronicles his Jersey high school life in the early 1970s, where drugs were the state hobby and every second girl was named Debbie, and recounts with both horror and wit of moving to New York right at the explosion of the AIDS epidemic. Rudnick takes a hysterical look at making films with such legends as the producer Scott Rudin and the director Barry Sonnenfeld, and reveals the roots of his brilliant comic timing as coming from his no-nonsense family and the Garden State.

Rudnick, 52, is the author of numerous comic plays and screenplays, including “Jeffrey,” “I Hate Hamlet” and “The Addams Family.” Rudnick met with freelance writer Dylan Foley at a café near his Manhattan home.

Q. How would you describe your mother and her two fierce sisters?

A. They were very funny. They did it both knowingly and unknowingly. They had a rhythm that was like a Marx Brothers’ comedy act. Comedy was their balance wheel and a good wisecrack was sacred in their homes. They became a force, especially in my world. I just hung on for dear life.

Q. How did growing up in New Jersey shape your sense of humor?

When I went to California for the first time, it reminded me so much of New Jersey. It’s a real car and mall culture, and so is New Jersey. Piscataway is famous for several things, including being the location of the Trojan Condom factory. I think the Trojan factory was finally seduced away by the glamour of Trenton. They also tested the first bar codes at a strip mall nearby. I also grew up looking at the bridge over to Trenton that says “Trenton Makes, the World Takes.” That’s New Jersey poetry.

Q. You have a series of fictional diary entries from Elyot Vionnet, an older gentleman not above using murder to enforce good manners with people who abuse their cell phones and steal cabs from other New Yorkers. Where did he come from?

A. Elyot burst forth. Ten of the 15 essays in my book are nonfiction. I was trying to be as rigorous as I could be and to do the fullest justice to the people I was writing about. Elyot was the id, the derangement of fiction. Elyot plays by no rules and can say whatever he wants, and can be as judgmental as he wants to be. I felt he was an appropriate balance to the nonfiction in the book. Elyot was a product of style rage and manners rage. It has happened to me more than once that a beautifully dressed young woman carrying an oversized coffee drink in one hand and a cell phone in the other comes towards me, oblivious to everyone and everything. I know she’s going to slam into me and I try to dodge the bullet. I wind up drenched in coffee and she looks at me like it’s my fault. That’s where Elyot comes in. Would it be all that tragic if the woman died? You know those stickers that they put on illegally parked cars? You want to put these stickers on these people’s foreheads.

Labels: "I Shudder:And Other Reactions to life, Death and New Jersey", Paul Rudnick