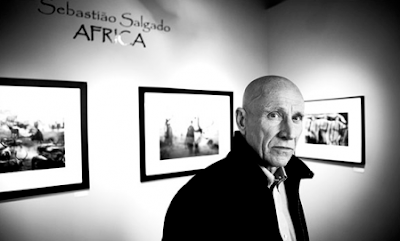 (Originally published in the Newark Star-Ledger in November 2004)


In his 30-year career, the Brazilian photographer Sebastiao Salgado’s overpowering black-and-white images have chronicled the mineworkers of Brazil, the ship breakers of India and the oppressed migrants and refugees of the world.
Salgado’s first book, “Sahel: The End of the Road” (University of California Press, $45) has just been published in English. The book follows the famine and drought that killed one million people in the Sahel region of Africa, including the Sudan, Ethiopia and Chad, in the early 1980s, For 15 months starting in 1984, Salgado volunteered with the international aid group Medicins San Frontiers, capturing iconic images, from the stoic father carrying the body of his dead son to a young boy with a pot on his head, leading a toddler to what they hope is the safety of a refugee camp. The photographs in “Sahel” are still horribly relevant, as the government of the Sudan is presently carrying out a genocidal war against people in the Darfur region of the southern Sudan, killing tens of thousands of people. The ongoing humanitarian crisis has already reached catastrophic proportions.

Salgado, 60, was raised in Brazil and trained as an economist. At 29, he became a photojournalist. He has published the acclaimed photography books “Migrations: Humanity in Transition,” covering the world refugee crisis, and “Workers: An Archeology of the Industrial Age” He and his wife live in Paris, where they have two sons and a grandchild. Salgado spoke with freelance writer Dylan Foley by telephone from Berkeley, California.

Q. How did you start to photograph the famine victims in the Sahel region?

A. In 1983, I’d shot a story in Brazil about starvation. I approached the people at Medicins Sans Frontiers. We made an arrangement that I would become part of MSF. For about 15 months, I would be living with them, shooting pictures. The pictures would be sold to magazines and part of the sale of these photos would go to MSF. I became a member of MSF and stayed with them.

Q. As a photographer, how did you confront the potential starvation of millions of people?

A. It is a question that is difficult to answer. When you do this work, you are not really a photographer looking at the starvation of millions of people. You are part of a group to raise money for Medicins Sans Frontiers. We created a system of information. As a parallel to this, the pictures went to magazines and newspapers in many different countries. The New York Times did a very big photo spread at the time, raising a lot of funds for the relief.

Q. Was it difficult for you to photograph dying men, women and children?

A. Absolutely. When I went back to Paris to edit my my pictures, and my own children were in very good health, it was difficult to have this dual life, to see these things in Africa. That is the big contradiction of our time. The planet is split between those that have and the others that don’t have. Now it is worse, for the concentration of wealth is in fewer hands.

You cannot maintain an emotional distance. You must be close to your subject. When you are inside the refugee camp, you are part of the camp. You know the kids, you know the people coming in. At the moment of food distribution, you are there. After spending two or three months, it becomes your life.

You must respect people’s dignity when you photograph them. You must approach this dignity so you don’t hurt it. It is the most important thing that a person has. This is what you transmit in your photographs.

A. At the time, we tried. We looked at many publishers in this country and no one wished to publish it. This was the same with the humanitarian organizations. They thought that Americans were not prepared to see these kinds of pictures. We published the book in France and Spain. Things have changed slowly. Twenty years ago, there were few Africans in the U.S. Now you have them everywhere, from taxi drivers to the Senegalese men selling things on Fifth Avenue in New York City. Millions of refugees cross the border of the United States every year. We have global violence, we have global misery. I think American audiences have matured and can now see these images that were made 20 years before. It is a shame to say this, but they are very modern pictures on these planet. These pictures are hard and violent, but this is the reality of most of the people on this planet.

Q. How do you balance photography and activism?

A. There is no balance. I don’t consider myself an activist. This is my life and this is what I do. I come from an underdeveloped country with a lot of social problems. As an economist, I was always traveling to Africa and around the world. I saw what was going on there. It was not a kind of decision to take pictures to provoke debate and discussion. I bring pictures from the life I live in. Photography was the language I had to speak.

Q. How is the situation in the Sudan now?

A. The situation in the Sudan is worse at this time, but it is also bad in Kenya, Tanzania and Rwanda. It is a problem that you have a continent with a large population and no investment there. The economy is going badly and the ecology is a disaster. No one cares what is going on in Africa. The war in the Sudan has been going on for 40 years. The Sudan is no better than it was 20 years ago. You have the bad situation in Darfur and other areas in southern Sudan.

Q. What can individuals do to help the situation in the Sudan?

Q. Critics have said that your photos make poverty “too beautiful.” How do you address this?