Leslie Chang on the Factory Girls Who Are Changing China 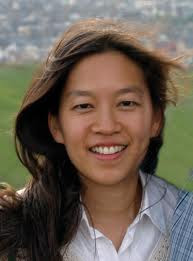 In Leslie T. Chang's engrossing book “Factory Girls: From Village to City in a Changing China”(Spiegel and Grau, $26) the journalist follows two women factory workers for four years as they struggle to survive in Dongguan, a massive factory town in southern China, where gigantic sneaker factories spit out Adidas and Pumas, plastic toys are minted by the millions, and only the most wily migrant workers can thrive.

Chang’s two main subjects are Min, a scrappy teenager always looking for a better job and Chunming, a former factory worker doing sleazy direct sales work from funeral plots to health items and looking for romance at the same time. Chang follows both women’s up-and-down love lives, efforts to get better work in the wild and merciless city and the need to avoid pitfalls like prostitution and scams. Chang explores the tortured history of China and her own family in the 20th century and the new economic explosion that has sent more than 100 million Chinese migrants from village to cities. Chang creates a nuanced story of Min and Chunming in a modern, post-Cold War China, and their battle to succeed and better themselves in Dongguan, where lies are often required and corruption infiltrates many aspects of life.

A. Some newspapers like the New York Times and the Washington Post had done stories on factory workers, and the articles all focused on workers who had lost limbs and horrible working conditions. I wanted to go to the factory towns to talk with people, not people who had horrible or heroic things happen to them, but just on the day-to-day life. I heard about the factory districts in Dongguan in southern China where the unskilled women went to work. In February 2004, I went down to Dongguan to talk to people over a long weekend.

Q. When did you realize you had great material for a book?

A. It was probably that first day, when I was sitting down and talking to those first two girls. Their stories were so dramatic, and there were millions of stories like that. I knew that if I found a few girls who were open with me, and wanted to keep in touch with me, this was going to be an amazing series of stories. I think there is a saying by Isaac Bashevis Singer who said that one of the reasons to write a book is if you are the only person who can write this particular story. The more time I spent in Dongguan, I realized I was seeing some pretty amazing things, and it wouldn’t be this way forever. I knew this place and I was the person to write this book.

Q. What were the motivations for peasant women to go work in factory towns like Dongguan?

A Obviously, they are poor, but it wasn’t the grinding poverty that motivated the migrants in the mid-1980s. As migration has become more entrenched, and became a rite of passage for young people, its meaning changed. It was a way to make money, but also a way to prove yourself, to learn skills and to become more worldly.

Q. Why did you wind up focusing on the tough, teenage Min and Chunming, a direct-marketing saleswoman in her late twenties?

A. I wanted to write about a younger woman and her trials and tribulations in entering the city, and then an older, unmarried woman who has lived in the city for a while with romantic pressures. Min and Chunming are remarkable people, but their backgrounds are representative. For Min, everything is about getting a better job, while for Chunming, she has moved on to other things like meaningful work.

Q. Why did you fold in your grandfather’s tragic history, a Chinese patriot and mining engineer assassinated in 1946?

A. There were parallels between my grandfather leaving his farming village as a teenager and making his way in the world and these young girls leaving the village and going to Dongguan. These two journeys tells a deeper story about modern China. The story of these girls being so determined and so ruthless to succeed in Dongguan could not have happened without the tragic history of China from the Civil War to the Cultural Revolution.