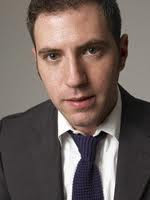 Stagedoor Manor has produced such actors as Robert Downy Jr. and Natalie Portman in its 34-year history. In his euphoric and witty new book, Rapkin follows three 18-year-olds--the over-the-top Harry, the perky Rachael and jock-turned-theater-natural Brian as they slough through the camp’s 2009 Steven Sondheim festival, performing the Broadway composer’s musicals “Sweeney Todd” and “Into the Woods.” Rapkin explores the camp’s turbulent history and the world of the theater geeks and outcasts who gather every summer in the Catskills, with some children hunting for agents and that big Broadway break, while others are looking to find themselves.

Rapkin, 32, is a senior editor at GQ Magazine and the author of “Pitch Perfect,” a chronicle of college a capella groups. He spoke with freelance writer Dylan Foley at a cafe in Manhattan.

Q. Would you describe yourself as a theater geek?

A. I am a theater geek of the highest order. There is something when the lights go down in the theater. The whole world goes away. The only thing that matters and the only thing alive is up on that stage. Things happen there that don’t happen anywhere else.

Q. How did this book project start?

A. I had this friend who went to Stagedoor Manor. We’d do karaoke and he’d sing an obscure song from “Once Upon a Mattress.” He’d say, “Oh, I did it at Stagedoor.” I became obsessed with the camp. I wrote the owner, telling her I had Broadway Playbills all over the walls of my room as a teenager.

Q. The structure of the book was very intense--three teenagers, three weeks. How did you set it up?

A. I was only considering kids who were in their final summer. I did a lot of interviews with kids who were graduating. Who were the talkers? I spoke with Harry and flew down to see him in South Carolina. I spoke with Rachael and met her in Florida. I met Brian at the camp, seeing him talking about golf. How’d he end up in theater camp? This was the perfect moment. The camp was its own little world, but these three were being tossed out of Eden.

Q. How did Stagedoor go from a homespun theater camp to an intense preprofessional program?

A. It started to get a reputation. Actors like Jon Cryer and Jennifer Jason Leigh went there. Word was spreading. If you were a kid who was serious about theater, you should go to Stagedoor. Michael Ian Black, who has a show on Comedy Central, went there knowing if he did a good job, a manager would see him. He got a manager and started going on auditions in New York City.

Q. Could you describe the legendary acting teacher Jack Romano, who died in 1991?

A. There could not be a Jack Romano today. Here was a Cuban emigre teaching acting in the Catskills, screaming at kids, throwing chairs at little children. He treated the kids like adults. It inspired them to work harder. Zack Braff and Michael Ian Black said they couldn’t have done what they did without him.

Q. With the heartwarming “Pitch Perfect,” which followed nerdy college a capella groups, and now “Theater Geek,” are you becoming the patron saint of obscure teen subcultures?

A. I would love that more than anything. I find these worlds to be inspiring, where people learn a lot about themselves and its inherently dramatic. There is something powerful about theater and music, and in the end, these stories are all about friendship.
(This interview ran in the Newark Star-Ledger in June 2010)
In “Theater Geek: The Real Life Drama of a Summer at Stagedoor Manor, the Famous Performing Arts Camp”(Free Press, $25), the journalist Mickey Rapkin spends three intense weeks in upstate New York at America’s premier theater camp, where campers immerse themselves in Broadway musicals, with all the attendant emotional highs and lows.
Posted by Dylan Foley at 9:33 AM